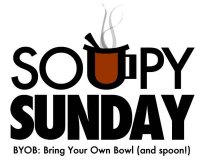 A few days ago Keri and I had an idea inspired by our friend Melissa. She had told Keri about her college days and how on Sundays she and her friends would gather together to make soup and while the soup cooked they would perform a play. What a cool thing to do! We just had to do something like that. And so, Soupy Sunday was born.

What we did was have each person attending the party bring one ingredient to add to the soup. It didn’t take long for our huge cast iron Jambalaya pot to fill up. So many ingredients, in fact, that we had to start a second (non-vegetarian) soup in our cast iron wok. While the soup cooked and Keri’s bread baked in the oven a bunch of us formed an impromptu jug band in the living room. The sounds of spoons, conga, steel drum, guitars, and castenets filled the air. Ah! Fun!

The soup turned out to be delicious even though we didn’t follow a set recipe. The two soups both had a vegetarian base made with sauteed onion and garlic, tomato, herbs, dandelion and other greens, macaroni, celery, and cauliflower. The vegetarian one had vegan “Italian sausage” added to it and the non-vegetarian had chicken and hot peppers. I had the vegetarian, of course. Click on the pictures below to see the larger version.

I’d like to thank everyone again for coming and for the clean up help. Much appreciated! Keri and I plan to host another one soon and the soup will most likely be our famous taco soup. Yum!

#journaling time with some #radiohead
#journaling time at my favorite coffee shop @borealiscoffee and listening to my second favorite album of all time #milesdaviskindofblue
Interstellar Roadtrip
quick analog/digital #collage for the day using 2 images, #birminghampencompany ink, and a grocery bag. #collageartwork #collageartist #analogcollage #cutandpaste #handmadecollage
Finished designing my newest #journal just in time! I usually start making my new ones at the halfway point of whatever my current one is. This is one of my favorite parts of my #journaling practice. Title for this is Normal Bias and the design is inspired by punk/rock show flyers. Full build album link in bio.
#journaling time at #borealiscoffee Just finished #journal no. 25! On to the next!