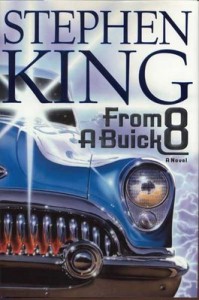 I finished King’s From a Buick 8 last night. In all, I thought it was a good entertaining read but not the least bit “scary.” It’s a great story tho and had the same kind of feel to it as The Green Mile. Here’s the synopsis from stephenking.com

“Shortly after his father, a Pennsylvania state trooper, is killed in a senseless automobile accident, Ned Wilcox discovers that the members of Troop D have a secret concealed behind their headquarters. Curtis Wilcox’s friends and colleagues take turns relating the twenty-year history of the mysterious Buick Roadmaster locked in Shed B and how its discovery and unexplained behavior has captivated the tightly knit group of men for two decades. The Buick seems to be a conduit to another reality and every now and then it breathes, inhaling a little bit of this world, exhaling a little bit of whatever world it came from.”